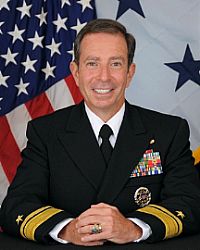 Shore assignments include: analyst at the Chief of Naval Operations Intelligence Plot; flag aide to the director of Naval Intelligence; intelligence branch/assignments officer at the Bureau of Personnel; federal executive fellow at the Fletcher School of Law and Diplomacy; the American Embassy in Paris as the assistant U.S. naval attaché; temporary assignment with the American Embassy in Skopje, Macedonia, as the assistant defense attaché (during Operation Allied Force); and the director of operations at the Joint Intelligence Center Pacific, Hawaii.

In addition to service in Afghanistan from 2009 to 2010, his duty with U.S. Central Command (CENTCOM) since 9/11 includes: commanding officer of CENTCOM’s Joint Intelligence Center in Tampa, Florida, from 2007 to 2009; N2 for U.S. Naval Forces Central Command in Bahrain from 2005 to 2007; intelligence watch officer in the Combined Air Operations Center at Prince Sultan Air Base in Saudi Arabia in 2003 during early Iraqi Freedom operations; and N2 for the U.S. Navy’s Task Force 50 in the Northern Arabian Sea from 2001 to 2002 during early Enduring Freedom operations.

Tickets may be purchased at:  Eventbrite – Dining Out